Dear comrades,
Ambattur Branch was opened on 12/12/1976 , the 35th years of
celebration will be held on 18.12.2011(Sunday) in Ambattur H.O. at
14.30 hrs onwards. On the occasion our founder of Ambattur branch and
General Seceratary comrade K.V. S will participate and honour
the front line Leaders of this branch for their strengthening and co
–operation for the function of this branch.

Posted by All India Postal Employees Group C Ambattur at 04:41 No comments:

Posted by All India Postal Employees Group C Ambattur at 04:37 No comments: 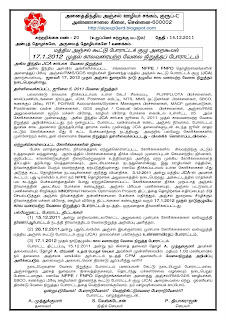 I am directed to refer to yours suggestion that instructions similar to
those already issued by the Circler may be issued at the level of the
Directorate to the effect that the officials who are about to retire
should not be given full fledged independent charge at least six months
before their retirement in any single or double handed post office in
order to frauds.

2. The proposal of the Circle has been examined by the Competent
Authority. Reports were called for from the Postal Circles and
examined. It has been observed from the reports of the Circles that
number of frauds committed by officials who are due to retire in six
months is very minimal.

3 In view of the above , it has been decided not to put the condition
that the officials due to retire should not be given full fledged
independent charge of Sub Postmaster (SPM) of single handed and double
handed Post Offices at least six months before their retirement .
However, the Divisional Superintendent should satisfy himself that the
official has a clear service record with no past involvement of any
kind in fraud cases etc. and that he is a person of probity and has the
required competence to provide quality service. The integrity of the
system should not be compromised under any condition.

Posted by All India Postal Employees Group C Ambattur at 08:53 No comments:

The Government has launched a drive to fulfil the backlog vacancies of
Scheduled Castes, Scheduled Tribes and OBCs and Persons with
Disabilities. This is following a review of the vacancy position in
these categories by the Union Minister of State for Personnel, Public
Grievances & Pension, Shri V. Narayansamy recently. All
Ministries/Departments have been directed to fill up all the vacant
posts in these categories by March 31, 2012.

The Government has been concerned about non-filling up of large number
of backlog vacancies reserved for SCs/STs/OBCs/PWDs. Therefore, two
Special Recruitment Drives – one for SCs, STs and OBCs another for PWDs
were launched in 2008 and 2009 respectively. The Drives enabled various
offices to fill up about 26750 backlog vacancies but large number of
such vacancies are remaining to be filled up.

Posted by All India Postal Employees Group C Ambattur at 06:43 No comments:

subjects for discussion with the senior superintendent of posts Tambaram

Posted by All India Postal Employees Group C Ambattur at 06:38 No comments:

NEW DELHI: A planned overhaul of a 113-year-old postal law proposes to end government monopoly completely in the next decade and a half, but, ironically, sets the clock back for courier companies, which are governed by a different policy at present. The draft Post Office Bill 2011 aims to open the letter mail segment to the private sector in 15 years by withdrawing all exclusive rights to India Post and removing all pricing curbs on private courier companies. The Department of Posts has sent the draft bill for cabinet approval to replace the archaic Indian Post Office Act 1898. The amendment will also provide greater legitimacy to the courier industry.
"Considering the role of couriers in the present economy, opening up the letter mail sector to them will not only accord legitimacy to the private operators but also would be recognition of market reality ," said an official in the department privy to the cabinet note. Courier companies are not celebrating , though. They say the transition regime proposed is too harsh and could end up killing the over Rs 7,000-crore domestic industry that engages nearly one million workers and pays Rs 1,200 crore in service tax.
In the run-up to the complete deregulation , the draft bill has proposed to open the express mail segment (EMS) with a "reserve area" of 50 gm for all articles at a price multiple of twice the government EMS rate. That is, a courier firm will have to charge at least Rs 50 for a package weighing up to 50 g, which is twice the Rs 25 charged by India Post for its Speed Post service for a similar package. At present, couriers are allowed in the EMS segment without any restriction or price, making the market fiercely competitive. The reserve area regulation will give India Post time to prepare for a more competitive regime.
"The proposal to have a reserve area for EMS is unfair and will lead to anti-competitive behavior by the postal department," said Vijay Kumar, chief operating officer, Express Industry Council of India . It could lead to the extinction of the courier industry, he said. Introduced in 1986, Speed Post is the only EMS service provided by India Post. The department has strongly defended the proposal to impose a reserve area by citing international examples. Globally, postal deregulation has been in phases and exclusive rights for state-run postal business still exist in many countries. In India, the courier industry has run ahead of the postal laws because it was allowed under the foreign direct investment regime, which allows 100% overseas investment in the business. International courier companies, such as DHL , TNT, FedEx and UPS , secured FIPB approval under the 100% FDI route.
The bill will now recognize them under the postal law, but the proposed transition turns the clock back somewhat by imposing restrictions that did not exist earlier. "Over 60% of the business for small- and medium-sized courier business in India is dependent on document delivery, which is typically within the 50 gm weight segment ," said RK Saboo, deputy managing director, First Fight Couriers. The proposal was retrogade and would force small courier firms to close down, he said.
The private industry is also not enthused by the entry in the normal mail business, or letter mail segment , where the draft bill has fixed a reserve area of Rs 150 gm for all registered couriers at a price multiple of Rs 2 times the postage of letter mail. The industry says India Post service is highly subsidized , which industry says will make it difficult for it to compete. The bill, which is likely to be introduced in the forthcoming monsoon session of Parliament, has also proposed to simplify registration and licensing of couriers without charging any fees. Most large domestic courier companies in the country like DTDC, First Flight and Skypak are all registered with the Registrar of Companies
Source: The Economic Times. July 9, 2011
Posted by All India Postal Employees Group C Ambattur at 03:26 No comments:

iT IS OUR LONG DESIRE TO OPEN A BLOG FOR AMBATTUR BRANCH AND TODAY IT IS BECOMING POSSIBLE IN THE PRESENCE OF OUR LEADER COM. K.V.SRIDHARAN, GENERAL SECRETARY.
WE WILL UPLOAD ALL THE DEVELOPMENTS THEN AND THERE.
YOUR PATRONAGE IS SOLICITED
YOURS FRATERNALLY,
K.JAYASEELAN,
BRANCH SECRETARY,
AMBATTUR 600053